In the last several videos, Dr. Ariel Green, an Associate Professor at Johns Hopkins University School of Medicine, discussed risks related to medication use among older adults. She has also described problems associated with specific classes of medications.

Here are some bottom-line points:

Polypharmacy - Too many medicines

The greater the number of medications a person takes, the higher the likelihood of problems. This includes side effects, interactions between medicines, and mistakes in taking medicines correctly. Five or more medicines is a rule of thumb that doctors use. More medicines are likely to result in more problems.

These are some widely used anticholinergic medications

An “anti” cholinergic medicine decreases the activity of some chemicals in the nervous system. This results in less saliva and tear production. Constipation is common. Serious side effects include confusion, “brain fog”, hallucinations, decreased coordination and falls.

Anticholinergic drugs are especially risky in people who have memory problems or who are age 75 or older. In one study, more than 40% of patients with memory problems were taking a medicine with anticholinergic properties. Typical medicines included non-prescription antihistamines,  muscle relaxants, and urine incontinence drugs. Cogentin is a medicine sometimes used for Parkinson’s Disease.

Pain medications should be used with caution. Narcotics can cause confusion, constipation, and incoordination. Long term use creates dependency and accumulation of drug effect. 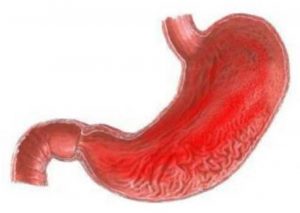 Erosive gastritis - The inside of the stomach is severely irritated and bleeds.

I am particularly wary of NSAID's (nonsteroidal anti-inflammatory drugs). Brand names include Motrin/Advil, Naprosyn/Aleve and Feldene. These pain killers are widely advertised, creating an impression that they are safe. These drugs can impact blood pressure. But the side effect that I see far too frequently is GI bleeding. This can happen with no warning and is more likely with longer use. More than 10% of seniors take NSAID's. Half of all patients taking long term NSAID's have injury to the stomach and more than 10% have gastric ulcers.

Sedatives, anti-anxiety, antidepressant and anti-psychotic drugs should be used with caution. These kinds of medicines, especially antidepressants, can be very helpful. But they are 2 edged swords. Even short-term use can result in falls and confusion. Long term use of sedatives and anti-anxiety medicines can result in dependency and “over-dosing”. One example is lorazepam (Ativan). 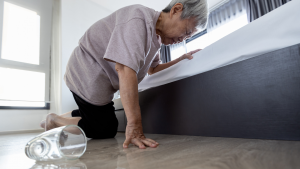 There is an increasing use of gabapentin (Neurotin) and pregabalin (Lyrica). These medicines can also result in confusion and falls. They are used for chronic pain, anxiety, and behavior management. However, these are “off-label” uses. The drugs were not approved for these purposes. These drugs are among the most prescribed drugs in the United States. One report states that up to 95% of usage is not for an approved indication.

This is a list of antipsychotic medications. The FDA warns that these medications, when used for dementia related psychosis, increases the risk of death.

Alcohol is not a medicine, but it should be mentioned. The use of alcohol together with any of the above medicines is especially risky.

Medication management is complex. There are also other medicines that are problematic in older adults. Some medicines fall in the category of PIMs, potentially inappropriate medications, in which the risks may outweigh the benefits. There is also a list of medications that increase fall risk. The Beers criteria is used by clinicians and describes the risks of medicines in detail. My hope is that patients and caregivers are aware that medications can cause problems. If a patient is falling a lot or appears more confused, think about the possible role of medications. And be sure to discuss it with your healthcare provider. Pharmacists, especially clinical pharmacists, are skilled at medication management.

Constipation? I Have Two Questions

Holidays: Gifting YOURSELF the Right Amount of Connection

Solving the over medication dilemma

Medicines that can cause problems in seniors

“Wow! She really ate well!” 4 Things Caregivers Can Do to Improve an Older Person’s Appetite

Making the hospital a better place for seniors